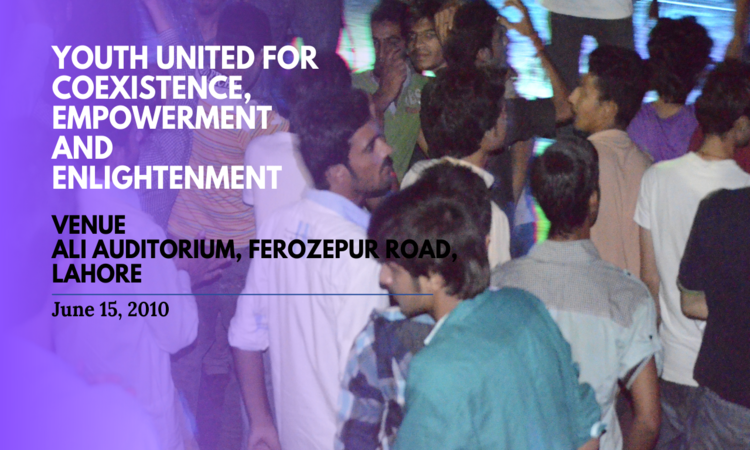 The Institute for Peace and Secular Studies organized a youth event today at the Ali Auditorium, Ferozepur Road Lahore. The event titled ‘Youth United for Coexistence, Empowerment and Enlightenment’ was based on the theme of promoting peace and tolerance among the youth and mobilizing them towards positive reformation of the society.

The event began with a one minute silence remembering the innocent Ahmedi victims who fell prey to the terrorist acts in Garhi Shahu and Model Town, Lahore on May 28th 2010 and was followed by a Peace Song. A number of guest speakers including Mr. Khaled Ahmed spoke at the occasion, sharing their knowledge and experiences of youth related issues in our society with the audience. Youth from different walks of life shared their achievements and encouraged the audience to take similar steps with dedication and commitment for the betterment of society. A documentary titled Let’s Revive the Golden Rule, featuring the ideas of coexistence and compassion by a prominent scholar Karen Armstrong, was also shown at the occasion. Music performances by young musicians and a street theatre performance by students added further color to the event. A special resolution was also passed by the youth about joining hands and engaging in collective efforts for promoting peaceful coexistence and harmony in the society. The event concluded with a marvelous tabla performance by “Pride of Performance” winner Shabbir Hussain Jarri and a fusion dance piece on the popular Jugni by Wahab Shah and troupe, specially created for today’s event. Here is the Resolution that was passed at the event:

The youth and members of the audience present at the event titled ‘Youth United for Coexistence, Empowerment and Enlightenment’, held 15th June 2010: