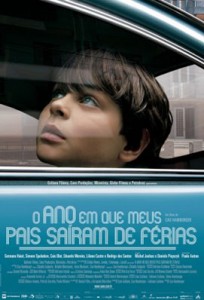 The Year My Parents Went on VacationDirector: Cao Hamburger.

Synopsis: A boy, named Mauro, is left alone by his parents in a Jewish neighborhood in the year of 1970, where both world cup and dictatorship happen in Brazil. Through the young neighbor Hanna, Mauro makes new friends, cheers for the Brazilian team and sees the movement of the police and militaries on the streets while waiting for his parents