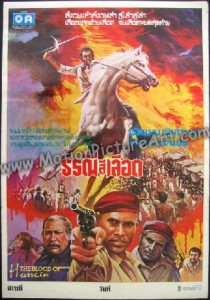 FILM SCREENING – THE BLOOD OF HUSSAIN

The Blood of Hussain

Synopsis: The film was banned by the late dictator General Zia-ul-Haque, after he seized power and became president of Pakistan in 1977, as the film portrays a fictional military coup in less than favorable light. The ban has not yet been lifted, and the director lives in exile to date. The film was eventually released and shown on British television. The film is about the life and death of Hussain, the youngest son of a Pakistani family. He meets a holy soothsayer who foretells his destiny, which is to liberate the poor and oppressed against a tyrannical government. The struggle parallels that of Imam Hussain of the 7th century who was martyred by Yazid I, the Umayyad Caliph.