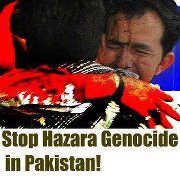 PROTEST TO CONDEMN THE HAZARA GENOCIDE

Please join us in protest to condemn the criminal silence of the government on the incessant killing of Hazaras in Quetta. For the past 11 years, the Hazara community has been the target of systematic racism and sectarian violence. The Hazara are a peaceful, law-abiding community who have come under constant threat from militant outfits. The government, the army and the intelligence agencies have all failed to deal with the menace of terrorism. Thousands of Hazaras have been forced to emigrate, hundreds to close down their businesses in Balochistan. There isn’t a rock that the Hazara left unturned in their desperate struggle for survival. They approached the Balochistan High Court, the Supreme Court of Pakistan and President Asif Ali Zardari. All these efforts remain unrewarded. Every day Hazaras are dying and nobody is doing anything to put a stop to this gross injustice.

We must put an immediate end to this violence. It is our ethical obligation as humans, and our responsibility as citizens of this country to raise our voice in defense of the defenseless. If you believe in humanity and human rights for all, if you hope to see a peaceful, prosperous Pakistan, if you believe it is criminal, immoral and inhumane to kill innocent people, join us in protest to condemn the Hazara Genocide in Pakistan.