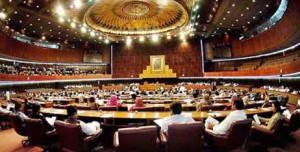 Existence of divergent point of views among people in a society regarding any aspect of life is inevitable. Appreciating and recognizing this multiplicity of views is an essential element of a democratic society. And accompanying this appreciation, there is also tolerance and respect for these views, both among the ruling class and masses which is the very essence of democracy. This is the very ingredient that differentiates a democratic state from a despotic one. Looking at Pakistan along this dimension of democracy depicts a very interesting picture. While at the time we have democratic elections, a representative democratic government, it is this lack of patience for a plurality of views that I wish to highlight in Pakistani context that is becoming increasingly problematic with every passing day.

The Pakistani society provides a classic example of forced labeling leading to societal polarization. What this means is that ordinary people and individuals are not asked their views, rather the dominant and prominent political elites decide their views and ideologies for them. Let me explain how and why. The most obvious and current example of this labeling which is becoming ever precarious day by day is this dichotomy between being a “liberal” and a “conservative” in Pakistani society. From the heated debates between the conservatives and liberals on media, events such as the murder of Mr. Salman Taseer to the latest episodes of a TV anchor poking into the lives of people in a public park, arguments for Pakistan being a secular or an Islamic state, we see a confrontation between these two ideologies. These contradicting ideologies seem to have been there for a long time in Pakistan. However, the problems among the two became acute, when they were made the only available choices for people with different mindsets, or on the contrary, people are forced into choosing these or labeled with these ideologies without determining their consent. These ideologies have a history of becoming polarized to the extent that they are now. As in the Pakistani context, it had a lot to do with the world becoming a global village in the post 2000 time period. This was a time of watershed in the history of this country, as the people due to the explosion of mass media; internet and advanced telecommunication were increasingly being integrated into the global village. While the conservative were historically powerful in Pakistan, due to internet revolution the liberal elites also found new grounds like twitter and Facebook to express their discontent which previously they were deprived off.  There was also mushroom growth of universities and colleges around the country but mainly concentrated in cities, which lead to increased awareness among the educated middle classes. Both these coincided with the phenomena of 9/11, incidentally or accidentally. Now these three factors, along with the power and intent of the state to root out militancy and extremism on pressure from the West, collided with the conservative institutions and mindsets that had gained substantial strength since the Zia period.

With the advent of war against terror and the resulting resistance by the conservatives, the rural masses resisted strongly to the “enlightened modernization” and rallied behind the conservative forces. The reason being that the rural Pakistan remained largely conservative with low or no access to modern education and under profound influence of religious clerics who dictated extremist ideologies; this was supplemented by their economic marginalization. On the contrary, the urban classes had mainly, partly due to  their exposure to globalization and adaptation of modern technology and part due to modern education, established an identity that was neither conservative nor liberal in the western sense of the word. This educated middle class progressed economically and wanted to get ahead further, but they were not politically empowered and this produced apathy in them from the current system of politics.

The large masses of educated Pakistani population that want to progress, develop and become globalized, become politically empowered but not at the expense of their conservative attitudes and religion and could not be labeled as a classic conservative or liberal. These classes are in state of social evolution, where they have become modernized by adopting western technology and education but their mindsets have not undergone fundamental changes yet.  It is also this very mass that has rallied behind Imran Khan for his call of a progressive Pakistan with religious mindset. While in countries like Egypt, increased globalization lead to social revolution, in Pakistan it polarized the society. Another important aspect of this dichotomy is the segregated education system of Pakistan, which is largely polarized between English and Urdu medium schooling, producing in turn polarized societal classes. This educational polarity has been there also, but was increased with the growth of modern schooling. And lastly, there is also lack of tolerance for non-muslin sections by labeling them as minority. The increasing number of abductions of Hindu girls is a living evidence of this fact which reflects the insecurity among the conservatives with pockets of modernization in urban parts of the country.

In conclusion, I would like to say that even the existence of these ideologies need not be destructive, as long as they exist peacefully, the problems arise when their existence poses a threat to  national co-existence. The state of Pakistan, apart from talking the rhetoric of being the champions of democracy, shall develop a popular discourse that is based upon tolerance and respect for other’s ideologies and views. This could be done by forging a consensus through dialogue among the polarized sections of the society through involving civil society in Pakistan and other relevant social actors representing different religious sections and ideologies. Most importantly, it has to include the general public, because it is only by involving the ordinary man that a sense of ownership for this new “tolerance discourse” can be generated leading to society that is tolerant to divergent point of views, thereby overcoming the democratic deficit in our current socio-political system.